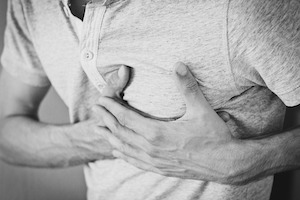 New research presented at the annual meeting of the American Orthopaedic Society for Sports Medicine, has indicated that surgery is an effective option for Pectoralis major tendon ruptures.

Here, you’ll discover everything you need to know about Pectoralis major tendon ruptures and why surgery could be the most effective treatment.

Pectoralis major tendon ruptures are one of the few shoulder injuries to almost exclusively affect men. They can occur at any age from 20 to 50 and are referred to by athletes as ‘pec tears’.

Type 1 is the most common Pectoralis major tendon rupture, whereas type 4 is extremely rare. The treatment option recommended will depend upon which type of rupture you’ve experienced and whether it is a partial or full rupture.

Pectoralis major tendon ruptures are most commonly caused by forceful activities. This could be bench presses, weightlifting, or certain sports such as rugby, wrestling and football.
There’s evidence to suggest steroid use can also increase the risk of developing this type of injury as the steroids weaken the tendons over time. However, you can still develop a rupture even if you’ve never touched steroids.

What are the symptoms of Pectoralis major tendon rupture?

As treatment for Pectoralis major tendon rupture should be sought as soon as possible, it helps to know the symptoms to look out for.

The very first sign of this type of rupture can often be heard, as well as felt, as soon as it occurs. You can literally hear it tear. However, the type of sound will vary depending upon which type of rupture you’ve experienced. If the tendon has ruptured from the bone, the sound is going to be more of a popping noise. If the muscle has ruptured on the other hand, you’ll most likely hear a tearing sound.

There is also likely to be some pretty dark bruising around the area. You’ll experience pain around the tear, but you may also feel pain within the shoulder. This is because the shoulder starts to work harder to compensate for the fact the pectoralis major doesn’t have full strength or motion.

The recent study carried out at a multi-centre and multi-surgeon integrated health system, followed 120 patients. Numerous surgical repair procedures were used and, after a final follow-up approximately 71 days after the procedures, a staggering 95 per cent were able to return to their full-time occupation.

There were just three procedures which failed and most procedures carried a very low risk. The procedures with the highest risk of complications were those involving bone tunnels.

Overall, as the study highlights, surgery can be a very effective way to treat Pectoralis major tendon ruptures. However, a full diagnosis will be required to determine which type of rupture the patient has experienced and to determine the best type of procedure that should be performed.

Please Get in Touch

Awake shoulder surgery – it’s not as ‘new’ as you might think! The shoulder symptoms you shouldn’t ignore
Scroll to top
Message from the London Shoulder Specialists

During the current COVID-19 crisis, all non-urgent / elective surgery bookings and appointments are postponed, but the London Shoulder Specialists are still available for consultation.

Consultations can be carried out either by telephone or video link.

Appointments can be arranged by emailing appointments@fortiusclinic.com or by calling 020 3195 2442.

We use cookies to ensure that we give you the best experience on our website. If you continue to use this site we will assume that you are happy with it.OK